Don’t want to miss out on exclusive vertical farming updates and developments? Sign up here.

We talked about climate change, but here’s another one to think about.  This past summer 400,000 residents in Ohio and Michigan went without safe drinking water because of a toxic algae bloom in Lake Eerie.

Despite warnings for years, conventional large scale commercial agriculture continued over-fertilizing their land while failing to deal with the runoff.  Fertilizer runoff contributed to high levels of phosphorous in the lake’s waters and created a perfect breeding ground for the poisonous plant.

And it wasn’t as if the information for better practices wasn’t there.  According to one source, “In 2010 and 2013, Ohio’s environmental, natural resource, and agriculture departments issued the Ohio Phosphorus Task Force Reports. In February of 2014, the US-Canada International Joint Commission issued A Balanced Diet for Lake Erie: Reducing Phosphorus Loadings and Harmful Algal Blooms report.”

On the other hand, one test case vertical farm has taken time to plan for their externalities and has even monetized them.  Take a look at this chart below from The Plant in Chicago. 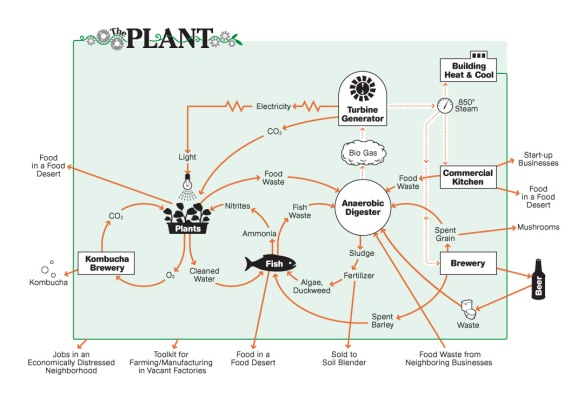 Now that they’ve built their system by refurbishing an old warehouse and maximizing their recycled materials, let’s look at The Plant’s inputs and outputs.  Inputs first:

And then their outputs:

Yes, all of that from one vertical farm!  Plus, The Plant leases space to local food startups and incorporates them into this very system.

Fertilizer runoff is not the only problem caused by conventional commercial agriculture.  But when it leaves people without safe drinking water, it’s hard to ignore.  Vertical farming is a commercial solution to this problem and it’s only a matter of time before more investment dollars start flowing to scale it up for more impact.